Located on the "coastal tableland" above Newport Beach, Costa Mesa's first inhabitants were native American Indians who settled on the mesa near the banks of the Santa Ana River. Artifacts found here indicate that this site was a part of the village they knew as Lukup.

Six Spanish leagues southeast of what's now Costa Mesa was Mission San Juan Capistrano founded in 1776. The padres would occasionally visit Lukup. In the early 1800s, when the Capistrano cattle (made famous by Richard Henry Dana in his memoir, "Two Years Before the Mast") grazed in the Costa Mesa area, provision had to be made to shelter the herdsmen. Possibly as early as 1817, but more likely between 1820 and 1823, a small adobe (above) was built to house the majordomo and his men. This structure still stands and was recently restored and transformed by the City into a museum at 1900 Adams Ave. in Estancia Park.

In 1810, this same area was part of the Spanish land grant of Santiago Del Santa Ana made to Jose Antonio Yorba. By 1880, settlers had begun buying portions of the rancho from Yorba's heirs, and in the same decade established the town of Fairview. A school house and a church were built near the present intersection of Harbor and Adams, and a 25-room hotel accommodated visitors to the nearby hot sulfur springs. However, in early 1889, a storm washed out the railroad and brought financial disaster to the community which soon reverted to a farming area.

By this time, the little town of Harper, named after a nearby rancher, had emerged on a siding of the Santa Ana and Newport Railroad. Its first business, Ozment's General Store, stood on the corner of Newport and 18th Streets and contained the City's first post office established in 1909. On May 11, 1920, Harper officially changed its name to Costa Mesa, which means coastal tableland in Spanish, and continued as an agricultural community growing sweet potatoes, corn, tomatoes, strawberries, and apples.

Building and oil drilling industries were just beginning to bring new growth to the City when the depression hit Southern California. Industries collapsed and the local bank closed. More disasters followed when the 1933 earthquake shook the town, damaging businesses and the Main School. But the school was soon rebuilt and continued in operation as the Clara McNally School. These buildings are now used for school administrative and service purposes.

Today, Costa Mesa is a major commercial and industrial center of Orange County. The 2005 Census noted population at 113,143. The city, which formally adopted the slogan "The City of the Arts” in 1999, is home to Pacific Symphony and the South Coast Repertory Theater. The 3,000-seat Segerstrom Center for the Arts (previously known as Orange County Performing Arts Center) was completed in 1985. In 2006, both the 2,000-seat Renee and Henry Segerstrom Concert Hall and the 500-seat Samueli Theater held their grand openings. 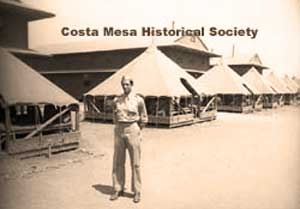 World War II brought many thousands of people to the area for training at the Santa Ana Army Air Base, located on what is now the Orange County Fairgrounds; Orange Coast College; and the present site of the Civic Center. When the war ended, many of these men and women returned with their families to begin the population boom which continues today.

Since its incorporation, Costa Mesa has turned from quiet suburban community with deep farming roots to a world-class city featuring some of the best restaurants, retail centers, and cultural arts in the nation, in addition to being the capitol of the action sports industry.