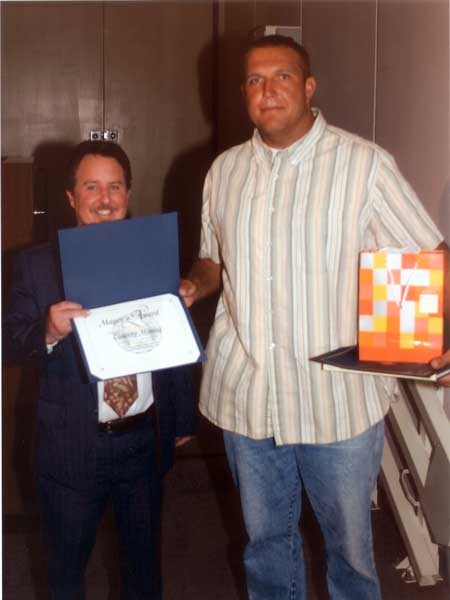 It is my sincerest pleasure to inform you that you have been selected as the June 2004 recipient of Costa Mesa's Mayor's Award! The Mayor's Award Program was designed to recognize individuals in the community who have displayed exemplary qualities of leadership and volunteerism, or have performed an outstanding act of service.

It was brought to my attention by Costa Mesa Police Chief Hensley that on May 4, 2004, you came upon a car accident that had caused one of the cars to catch fire. Risking your own life, you pulled the driver to safety just before the flames consumed the interior of the car.

I thank you for your courage in the face of life-threatening circumstances. Taking the initiative to help someone in distress before an emergency response unit could arrive is truly an extraordinary deed. Since time was of the utmost essence, your taking control of the situation made the difference between life and death. On behalf of the City Council and the citizens of Costa Mesa, I commend you for your outstanding act of service.

As you have already confirmed with my staff, we will publicly honor you at the City Council meeting of Monday, June 7, 2004. The meeting will take place in Council Chambers at 6:30 p.m., at Costa Mesa City Hall, 77 Fair Drive. We look forward to honoring you in this way.