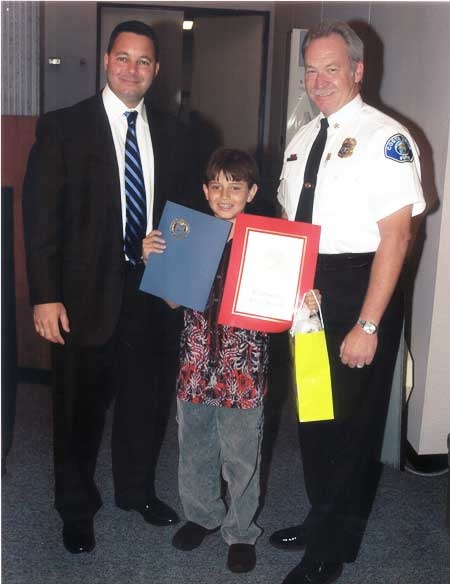 Congratulations! I am happy to inform you of your selection as the recipient of the Mayor's Award for September 2005! The Mayor's Award Program was designed to recognize individuals in the Costa Mesa community who have displayed leadership, performed a good deed, and demonstrated a sincere concern for the common good.

Fire Chief Jim Ellis brought to my attention the heroic act that you performed on July 24, 2005. While playing with your friends and family at Halecrest Park, you noticed Jessica Davis at the bottom of the pool. As she was not moving, you immediately dove down and pulled her up to the surface. By yelling for help from your mother and father, who called the paramedics, you responded quickly and bravely in the face of danger. Actions such as yours, Kenneth, are exactly why the Mayor's Award Program was established.

As your mother has already confirmed with my staff, I will publicly honor you at the City Council meeting of Tuesday, September 6, 2005. The meeting will take place in Council Chambers at 6:00 p.m., at Costa Mesa City Hall, 77 Fair Drive. I look forward to meeting you.