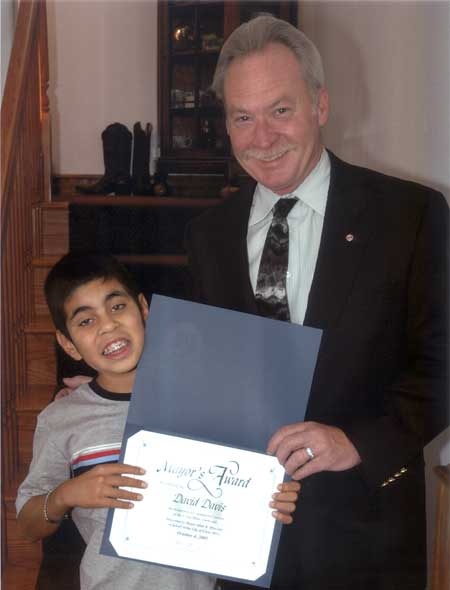 I would like to take this opportunity to personally congratulate you on your selection as the Mayor's Award recipient for October 2005! On behalf of the City Council, I wish to sincerely express the City's appreciation for your quick actions on July 24, 2005. Your poise and foresight under pressure assisted in the rescue of your little sister, Jessica, from the bottom of an 8-foot deep swimming pool at Halecrest Park.

Your rescue efforts proved heroic in saving your sister's life. Even more remarkable is the fact that you have autism and had to make a very quick decision followed by swift actions. This selfless deed, David, exemplifies the best qualities of Costa Mesa's residents and the ideals on which the Mayor's Award was founded.

The Mayor's Award Program was designed to recognize individuals in the Costa Mesa community who have displayed leadership, performed a good deed, and demonstrated a sincere concern for the common good. The Costa Mesa City Council would like to publicly honor you at the City Council meeting of Tuesday, October 4, 2005. The meeting will take place in Council Chambers at 6:00 p.m., at Costa Mesa City Hall, 77 Fair Drive. I look forward to meeting you and your family.