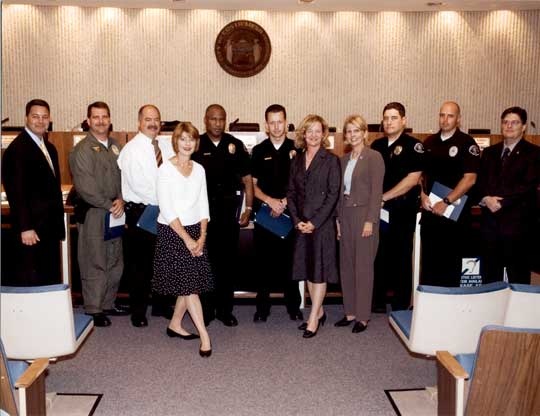 Congratulations! It is my great pleasure to inform you that you have been selected as the recipients of the Costa Mesa Mayor's Award for June 2007. On behalf of our City, I would like to express my appreciation for your outstanding work in protecting the safety and well-being of our community.

On the evening of April 18th, you responded to a report of shots fired in the vicinity of James Street and Pomona Avenue. Upon stopping a suspicious vehicle, you then arrested seven gang members armed with baseball bats, knives, and other makeshift weapons. Further investigation revealed that a confrontation had occurred between the occupants of the vehicle and an armed rival suspect, who was also later arrested. Thanks to your efforts and coordination with many other Police Department personnel, you have ensured the successful apprehension and prosecution of six juvenile and two adult gang members.

Criminal gang activity is a critical issue facing Costa Mesa today. In your roles as law enforcement professionals, you represent the frontline in reducing gang activity and violence in our City. On behalf of the City Council, I would like to express my deepest appreciation for the professionalism and teamwork that you have demonstrated in responding to the events of April 18th, and in your daily dedication to the welfare of our community. Thank you again!