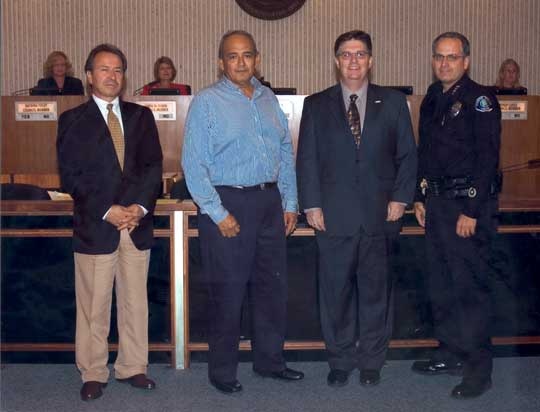 Congratulations! It is my pleasure to inform you that you have been selected as the recipient of the Costa Mesa Mayor's Award for September 2008. The Mayor's Award Program was established to recognize and appreciate members of the community who have displayed qualities of leadership, community involvement, and volunteerism. You have been selected for this prestigious award because of your efforts to improve traffic safety in the City of Costa Mesa.

Your keen observations of traffic and your continuous efforts to enhance safety have resulted in lane modifications that have significantly reduced dangerous speeding in the City. As you know, you have met several times with Peter Naghavi, the City's Public Services Director, and you expressed your concern over the consistent speeding on Adams Avenue, between Mesa Verde Drive East and the Santa Ana River. The street's prevailing speed of traffic was consistently recorded above the 50 miles per hour posted speed limit. Your input led to the modification of traffic lane striping, the addition of signage, and the installation of an electronic speed warning radar. These improvements have reduced traffic flow to a safer 45 miles per hour.

I commend you for taking an active role in helping make the streets of our community a safer place to travel and commute. I am confident that the reduced traffic speed will result in fewer collisions and will provide safer streets for our pedestrians and bikers. On behalf of the City Council, I would like to express my sincere appreciation for taking the initiative to elevate our level of safety and I thank you for your exemplary citizenship.

As you have already confirmed with my office, I will present you with the Mayor's Award at our City Council meeting of Tuesday, September 16 at 6:00 p.m. in City Council Chambers, 77 Fair Drive. If you have any questions, please contact my assistant Chris Goldsworthy at (714) 754-5327