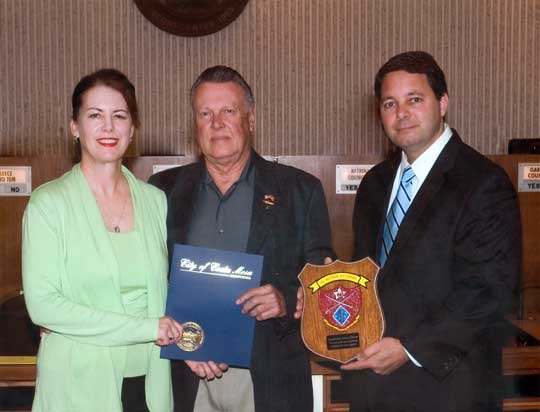 Congratulations on being selected as the recipient of the Costa Mesa Mayor's Award for March 2009. The Mayor's Award Program was established to recognize and appreciate members of the community who have displayed qualities of leadership, community involvement, and volunteerism.

Over the last five years, you have volunteered your time to collect contributions for the Semper Fi Injured Marine Fund. You have been the driving force behind a sponsored golf tournament at the Costa Mesa Golf and Country Club and an auction at the American Legion facility. The event held last December raised over $46,000. This full amount was given to the Fund and your past efforts have collectively raised over $150,000. The funds will provide financial assistance and quality of life solutions to those Marines injured in combat, training, or with life threatening illnesses; and their families, as well those service members injured while in direct support of Marine units and their families. This is quite an achievement!

As a former Marine, your efforts signify the loyalty that individual Marines have for "Corps and Country", even after leaving service. You were instrumental in obtaining the City's approval to adopt the 1st Battalion, 5th Marine Regiment or 1/5. Your patriotism and support for our troops over the years have not gone unnoticed and for this, you are being recognized with the Costa Mesa Mayor's Award.

On behalf of the City Council, I would like to express my sincerest appreciation and thanks for your outstanding effort and commitment to the young men and women serving our country, and in particular, the injured Marines. As you have already confirmed with my assistant Chris Goldsworthy, I will publicly honor you at the March 17 City Council meeting that will be held in Council Chambers located at City Hall, 77 Fair Drive. If you have any questions, please call Chris at (714) 754-5327.