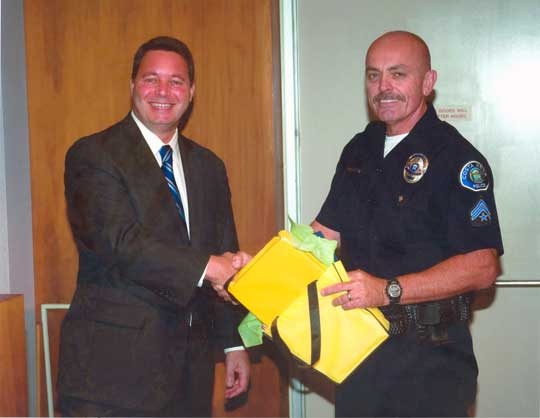 Congratulations on being selected as the recipient of the Costa Mesa Mayor's Award for October 2009. The Mayor's Award Program was established to recognize and appreciate members of the community who have displayed qualities of leadership, community involvement, and volunteerism.

On November 19, 2008, you were on patrol near the intersection of Ford Road and Newport Boulevard when you noticed a suspect fitting the description of a criminal street gang member. As you drove up to identify him, he immediately ran away in the opposite direction. Without hesitation, you began pursuing the suspect on foot and eventually caught up to him, wrestling him to the ground. Using excellent instinct and training, and despite dislocating your shoulder from the struggle, you were able to subdue the suspect and hold him down on the ground until fellow officers arrived. The suspect turned out to be a previously deported felon with a history of violent offenses, inctuding a number of warrants for arrest.

As a direct result of your bravery and courage, the City of Costa Mesa has become a safer place to live. Police officers are charged with the enormous responsibility of enforcing laws while maintaining public trust and good will. We are incredibly indebted to your service. On behalf of the City Council, I would like to express my sincerest appreciation and thanks for your outstanding actions and commitment to public safety.