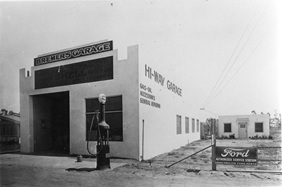 Opened by Costa Mesans Ray Wallace and O. E. Hixon in 1924.  A full service garage, they sold gas, tires and batteries, did car repairs and tune-ups.  Loaner cars were provided to customers while their cars were being repaired.  In 1930 a tow truck and 24 hour emergency service became available.  In 1934 Wallace became a sub-dealer for Theodore Robins Ford (located in Newport Beach) and remodeled part of the garage to serve as the showroom.  The garage housed the fire truck for the Costa Mesa Volunteer Fire Dept from 1935 to 1938.  The garage was sold in 1939. 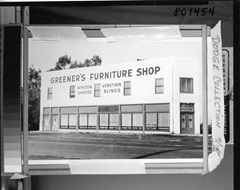 Owned and operated by Emil Greener, a cabinet builder, the furniture store was originally located on Rochester Blvd.  The store sold furniture, lamps, flooring and window coverings.  Mr. Greener also provided furniture repairs, cabinet work, picture framing and would rent vacuum cleaners to his customers.  In 1929 Greener built a two story building which housed the furniture store and repair shop, and had a large hall on the second story which was used for community meetings.  He retired in 1930, but remained active in Costa Mesa Civic life 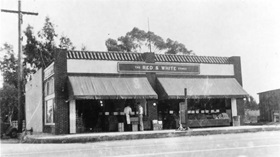 Opened by Albert Dudek, the store was a part of a national chain of independently owned food stores which used their collective purchasing to offer lower prices.  The store contained independent meat and produce departments.  In 1936 Dudek moved the store to 1790 Newport Blvd to a larger store with a parking lot in the rear and a covered lounge in the front where shoppers could wait for the bus.  The original site became a Ben Franklin Five & Ten.  The store sold in 1944 to Dr. Margaret Crawford who used it as her office. 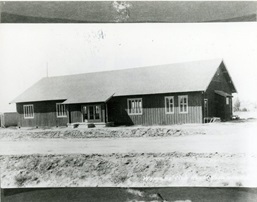 First organized in1908 as a sewing circle and social club, the women originally met in member’s homes.  In 1922 land was donated by Mr. & Mrs. Carl Spencer and the clubhouse was built at a cost of $3500.  The clubhouse opened in 1923 and became the center of Costa Mesa’s civic and social meetings.  The club members spearheaded many community projects.  They organized the first library in town and acted as volunteer librarians.  Starting in 1924, a well baby clinic was held once a month at the clubhouse, where families could receive pediatric exams and advice at no cost.  Landscaping of Newport Blvd. and English classes for “foreign born residents” were also sponsored by the women.  Socially, the club held musical programs, plays, speaker series, dances, dinner banquets and rummage sales.  The name was changed to the Costa Mesa Women’s Club in 1962 and is still in existence.

A retail dealer, owned by Jesse Answorth and Ross Hostetler, open to the public as well as contractors. The business supplied most of the materials for building in Costa Mesa.  They carried high grade lumber from all over the U.S.  and all other building supplies.  Construction, remodeling and financing were also offered by the business.  In 1931 they purchased another Costa Mesa lumber company, adding that stock to their inventory.  A move to a larger building to handle increasing business was made in 1941. 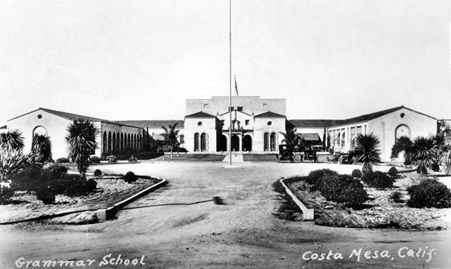 Funded by a $50,000 Bond Issue, which citizens voted for 158 – 2, the six room school opened in 1923 with an enrolment of about 200 students.  In 1927, two tennis courts were built on the campus and classes in P.E., music and art were added to the curriculum.  Another five rooms  were added in 1924 including a teachers’ room and a cafeteria, which served a hot lunch.  An earthquake in 1933 caused damage beyond repair and the school was rebuilt, reopening in 1935.  Also known as Main School, it housed grades 4 – 8 in the late 1930’s and was an alternative high school in the 1970’s

300 lb. blocks of ice, which were made in Newport Beach were brought to the Costa Mesa location, stored, sold in 100 lb. blocks for 25 cents, and delivered to customer’s homes.  Owner Ira Dinger would also rent space in the ice lockers to residents for meat storage, and was often paid with pieces of frozen beef, pork or goat.  In 1937 the business began selling “cooleraters” (refrigerators).  Customers were allowed to try one for 10 days without charge prior to a purchase.  In 1940, Dinger became a distributor of Bastanchury bottled water. 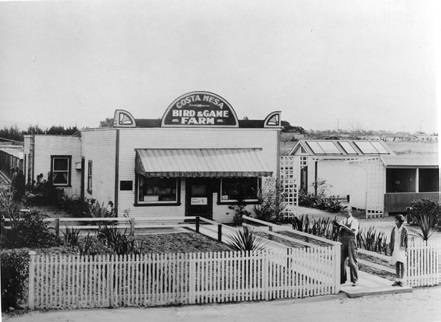 Originally owned by Mr.  & Mrs. Leroy Chamness and William Patterson, who became the sole owner in 1925, the business consisted of an acre aviary of tropical and game birds including, macaws, cockatiels, parrots, pheasants, egrets, canaries, parakeets and finches.  The birds were bred, raised and sold to zoos.  Tropical fish and monkeys were also on display and for sale.  The farm was a popular local attraction, with hundreds of visitors.  M. G. Eighmey bought the business in 1927 and changed the name to Eighmey’s Bird and Game Farm.  The business was sold in 1946 and the site became a trailer park. 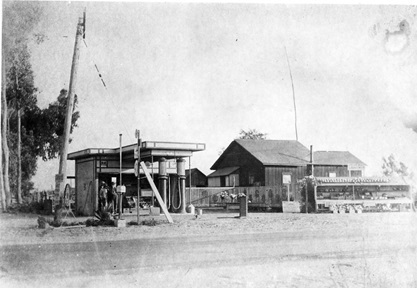 Opened by Fred & Harry Opp in 1924 the business was a 15 acre farm growing flowers, bulbs, fruits and vegetables.  The bulbs – iris, narcissi, tulips, daffodils, ranunculus, freesias, and gladioli – were harvested and sold to wholesalers in Santa Ana, Los Angeles and on The East Coast.  The brothers became famous for the napkin rings, table lamps, flower vases, magazine racks and other items they made and sold from their dried gourds.  The gourd items, which were carved using a “double knife saw” invented by Opp , were exhibited at the 1939-40 New York World’s Fair.  The farm was sold in 1951to Mesa Homes for a housing tract.

In 1927, Earl Patterson purchased 5 acres and built a “modern dairy” consisting of office space, a bottling department, icing boxes plus corrals & pens of 50 dairy cows.  He delivered his milk, butter & ice cream in white trucks.  In 1929 the business merged with Raitt Dairy of Santa Ana and continued to operate in Costa Mesa with Patterson as manager. 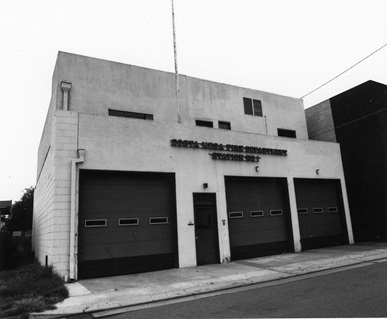 The Costa Mesa Fire Department was organized in 1926.  It was a volunteer force of 15 members whose equipment consisted of a hand drawn hose cart, a hand extinguisher, buckets and tools.  An old cast iron school bell was used to call the volunteers.   The fire station was built in 1938 after the land was purchased using donations from local businesses and citizens.  The building was built and maintained by the California Division of Forestry.  A new pumper truck and a rescue truck were added at this time.  The Fire Department remained a volunteer force until the incorporation of Costa Mesa in 1953.  The fire station was closed in 1979 and the building demolished in 1981.