The Orange County Board of Supervisors is scheduled to again consider the John Wayne Airport General Aviation Improvement Program (GAIP) on Tuesday, June 25. This item was continued from the Board’s May 7 meeting to allow time for a compromise solution proposed by Supervisor Andrew Do to be evaluated by County staff.

On June 19, County staff moved forward with the same recommendation that was presented at the May 7 Board meeting, which asks the Board to approve Alternative 1. The cities of Costa Mesa and Newport Beach opposes Alternative 1 in its original form because it will result in more jets flying over our community.

Click here for the staff report and public comments.

Both cities remain willing to consider the “modified Alternative 1” as proposed by Supervisor Do, or another reasonable plan that contains the project elements that protect the communities under the airport’s arrival and departure corridors from additional noise and pollution impacts. Specifically, Costa Mesa and Newport Beach leaders are looking for the Board to adopt a plan based on, or that contains element similar to, the principles of Alternative 3 (the preferred alternative):

At the initial May 7 meeting when the board took up this debate, the cities of Costa Mesa and Newport Beach had City Council representatives present who spoke in favor of Alternative 3. The City of Newport Beach also had its outside counsel speak about some of the issues raised in the letter the City sent to the Board on May 3. (Laguna Beach and Tustin sent letters in support of Alt. 3 and the Huntington Beach City Council voted to support Alt. 3  on May 6.) There was a strong showing of community members, but there wasn’t a clear consensus behind one alternative or concept. Some supported the So Cal Pilot’s proposal (calls for 3 FBOs and more space for light GA), others sought to delay the Board's vote, and some supported Alternative 3. No one spoke in favor of Alternative 1.

The table below (using the EIR’s 2026 forecasts for the alternatives) compares Alternative 1, Alternative 3 and the Proposal presented at the May 7 Board meeting. 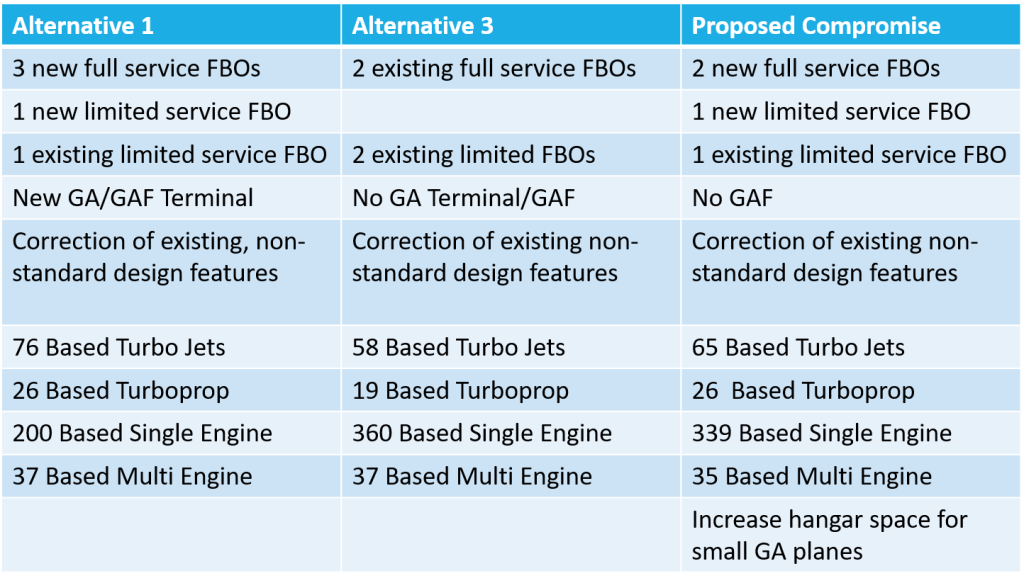 The proposed improvements include:

All improvements are proposed to be confined to the existing airport footprint. You can learn more about the program at ocair.com/generalaviation/gaimprovement.

The County of Orange prepared a Draft Program Environmental Impact Report (EIR) for the proposed General Aviation Improvement Program (GAIP) in the fall of 2018. The draft EIR public review and comment period began on September 20, 2018 and closed on November 21, 2018. The Draft EIR is available for public review at ocair.com/deir627.

The County issued its responses to comments on April 9, 2019. You can access the information at ocair.com/generalaviation/gaimprovement.